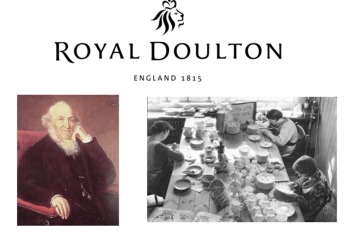 The Royal Doulton Company is one of the most renowned English companies producing tableware and collectables, with a history dating back to 1815. Operating originally in London, its reputation grew in the area known as The Potteries, where it was a relative latecomer compared to other leading names such as Spode, Wedgwood and Minton. Today, its products include dinnerware, giftware, cookware, porcelain, glassware, collectables, jewellery, linens, curtains, and lighting, among other items.

The Royal Doulton company takes its name from John Doulton. John Doulton, born in Fulham in 1793, learned his trade at the Fulham Manufacturing Company, well known as one of the first English commercial producers of stoneware, founded by master potter John Dwight in 1688. John Doulton completed his apprenticeship, earning a reputation as one of the best pot throwers in London.

How May We Serve You?